Yesterday was a loooong day! There was more or less a National race, the organizers put together two indoor series we have in Sweden called SSIC and MSEC.

It was horrible to drive on. It was so narrow in some places that only two 1/10 touring cars could fit between and that is something we aknowledged even before the race. But they didnt change mich and the worst parts of the track om the track was still there in my opinion. No track should be about 1 meter wide!

I didn’t enjoy this race at all, track wasn’t fun and i was more scared to crash then to lose. My motivation was down low on this one. I even considered going home becuse i couldn’t enjoy it.

I think the track was just too narrow and tight that you just can’t flat out. 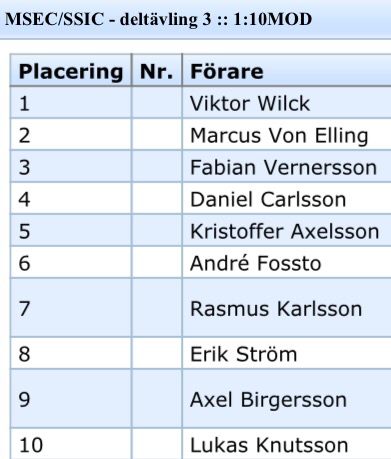 As expected Viktor Wilck would take his Project 4x into first starting spot.

For myself i could barely make into A-Main. In qualifying i struggled a bit with setup, but also with traffic. The traffic was horrible here and i crashed a lot becuse of it. So lucky to start 6th place!

My feeling going into A-Main was not that good. I struggled alot with the onpower/offpower handling. So i went up in Differential oil in the rear. Going from 5000cst to 6000cst made a huge difference!

I could now lap the same laptimes as the top 3 drivers. But my starting position was not good. I could only hope the others made mistakes and i did not!

I tried it during warmup laps, felt great! Only problem was that my car was still very edgy so i had to compensate for that as my setup knowledge is bad compaired to others. My setups are usually fast, but not the easiest to drive and that is something i need to work on!

I talked a little with Wilck and asked about his setup, and to my surprise his setup didn’t differ from most cars of the same manufacturer. Becuse his car looked so composed and smooth i thought it was a setup thing. But it really seems, you don’t get 3rd at a world championship by chance!

His skill amazed me and i got inspired. Right there i set my mind on driving better, and that’s what i’m going to do!

No one could really keep up with Wilck. But something stood out on this teack and that is the knowledge that the most skilled drivers was the fastest. Not in every case the most skilled are the fastest. But at this track the tolerances was so small so you really needed the skill to get around fast!

The finals was very clean and i couldn’t hear the judges call any penalties in our finals. But many mistakes were made and i could find myself in 2nd a couple of times! But i just wasnt fast enough and i noticed i lacked motorpower and lost alot of time on that. I didn’t know this until the Finals. More power next race!

I made mistakes in second place and couldn’t do anything really to keep it tigether as those faster behind was almost hitting me on the small straights and i was stressed they would hit me and i would crash really hard. So i started overdrving…

End of the day, i am really happy with my result! I made huge steps forward and i beat former winners and podium finishers this weekend. I can’t complain!

So i am super happy about that really!

I got 4th and was the best debuting driver!

Big congratulations To Fabian and Marcus Von Elling being close to Wilck in laptimes! We showed that we have some world class drivers here!

BIG THANKS TO EVERYONE THAT SUPPORTS ME!

And all friends at the track!

FROM THE LIVE STREAM! Big thanks to Eslin242 for streaming so many top series in Sweden!